While the Supreme Court issued three sets of reasons in Dunsmuir v New Brunswick,[i] all members of the Court agreed that the system governing the standard of review in administrative law had become too complex and was in need of simplification. Mr. Justice Binnie offered perhaps the most compelling reason to support this reform: access to justice.

The existing system, Binnie J argued, inflated the time and legal resources required to adjudicate what is supposed to be a quick and inexpensive way of challenging governmental decisions. As he persuasively put it (at para. 133) “[e]very hour of a lawyer’s preparation and court time devoted to unproductive ‘lawyer’s talk’ poses a significant cost to the applicant.…A small business denied a licence or a professional person who wants to challenge disciplinary action should be able to seek judicial review without betting the store or the house on the outcome.” As a decade has now passed since these words were penned, it behooves us to ask: did the Court in Dunsmuir succeed in reducing the legal resources devoted by litigants to debating the standard of review? As readers of Paul Daly’s Administrative Law Matters blog may already know, my preferred approach to answering such questions is through empirical analysis.[ii] This case is no exception.

As described in greater detail below, after reviewing a sample of 120 factums filed by litigants before and after Dunsmuir was decided, it would appear that the Supreme Court may not have been successful in reducing the legal resources devoted by parties to mooting the standard of review. This suggests that – as Madam Justice Abella recently argued in Wilson v. Atomic Energy of Canada Ltd.[iii] – significant new doctrinal changes may be needed in order to fully realize the goal of simplifying the standard of review for litigants and lower courts.

Using WestlawNext Canada’s database of factums extracted from court files,[iv] I collected factums from judicial review applications and statutory appeals in the Ontario Divisional Court and the Federal Courts. With each jurisdiction, I collected the 30 factums in the database that were filed in the period immediately preceding the release of Dunsmuir (going back as far as July of 2006) as well as the most recent 30 factums found in the database (these span the period from September of 2013 to December of 2016).

With regard to the Ontario Divisional Court, the 60 factums that I examined concerned judicial review applications or statutory appeals of a variety of different administrative decision-makers, the most common being the Director of the Financial Services Commission of Ontario, a municipality, the Human Rights Tribunal of Ontario or the Environmental Review Tribunal. The 60 factums in the dataset that were filed in the Federal Courts primarily concerned a variety of intellectual property-related decision-makers such as the Registrar of Trade-marks and the Commissioner of Patents as well as the Canadian Human Rights Tribunal and adjudicators dealing with federal labour relations matters.

Results: No Apparent Reduction in Legal Argument on Standard of Review

With regard to factums filed in the Ontario Divisional Court, the average number of paragraphs dealing with the standard of review increased from 8.5 paragraphs per factum before Dunsmuir to 10.4 paragraphs more recently, representing an increase of 22%. Similarly, the average share of factums devoted to debating the standard of review increased after Dunsmuir, from 14.2% in 2006-08 to 16.5% in 2013-15, which represents an increase of 16%. 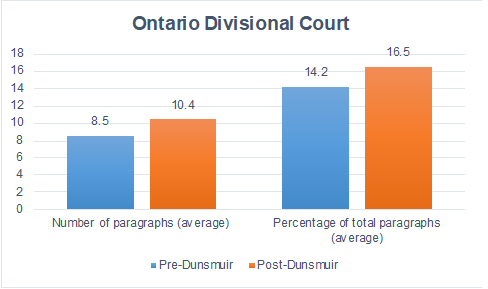 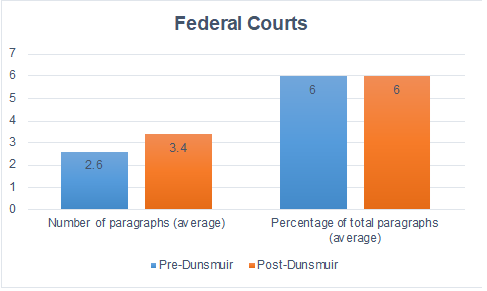 The data reviewed above provide some support for the provocative position taken by Abella J in Wilson. In that case Abella J decried as “insupportable” the fact that a substantial portion of the parties’ factums in that case and the decisions of the lower courts were occupied with what the applicable standard of review should be. This, she suggested (at para 20), required the Court to “think about whether this obstacle course is necessary or whether there is a principled way to simplify the path to reviewing the merits.”

Madam Justice Abella’s proposed solution was to adopt a single reasonableness standard of review.[vi] While none of her colleagues were willing to endorse this proposal, Abella J conceded (at para. 19) that “[t]here are undoubtedly many models that would help simplify the standard of review labyrinth we currently find ourselves in.” If simplification in the name of access to justice remains a priority, members of the Court will need to explore and adopt such a model in the coming years. If they do, then that new model will be ripe for further empirical assessment when it is ultimately applied by litigants and lower courts.

[iv] WestlawNext indicates on its website that this database “includes facta extracted from the court files of significant court cases in every Canadian Common Law jurisdiction.” These documents are selected from cases that fall into 12 different subject areas including “Canadian Cases on Employment Law,” “Canadian Environmental Law Reports,” “Intellectual Property Cases” and “Municipal and Planning Law Reports.”

[v] Aside from the fact that the dataset of factums is not truly random, I have not sought to control for potentially confounding factors using a multiple regression analysis. For an explanation of why I tend to reject doing so see Danay, Quantifying Dunsmuir, supra note 2 at 576.

Law nerd. I teach public law at the University of Reading, in the United Kingdom. I studied law at McGill, clerked at the Federal Court of Canada, and did graduate work at the NYU School of Law. I then taught in New Zealand before taking up my current position at Reading. View all posts by Leonid Sirota